This article is a stub. You can help Steins;Gate Wiki by expanding it.

“8-bit ADV Steins;Gate” (ファミコレADV シュタインズ・ゲート, Famicolle ADV Shutainzu Gēto) is an 8-bit Nintendo Famicom/Nintendo Entertainment System game bundled with the Nintendo Switch releases of the visual novel Steins;Gate Elite. It is a retro adventure game in the style of classic Famicom/NES games of the 1980s, with downmixed chiptune versions of the music from the original Steins;Gate and the same characters, but a different plot, taking place on different worldlines. It was developed by 5pb. Games, and was released in September 2018 for Nintendo Switch. It is actually a Famicom/NES ROM that is run using a bundled Famicom/NES emulator.[1]

8-bit ADV Steins;Gate is a retro console adventure game designed for players who have already beaten the original game and are familiar with its plot, as it is full of spoilers for the main game. It has a simple menu where you navigate using the up, down, left, right, and A buttons. In order to make it authentic, just like many early Famicom/NES adventure games, it is impossible to save or load your game, at least on the Nintendo Switch, although if you play the game using a different NES emulator than the one bundled with it on the Switch, using savestates is possible.

The initial objective of the game is to help Suzuha Amane fix her time machine so she can go back in time from 2010 to 1975 to get an IBN 5100. The plot continues after this, as an interesting alternate way the plot of the original Steins;Gate could have gone, with the plot of this game being more simple and straightforward and having much less mystery and complexity than the original game. The only known worldline from this game is 0.295582α, which takes place about a quarter of the way through the game, right before Suzuha goes back in time to 1975.

After the first part of the game focusing on fixing Suzuha’s time machine, the second part is focused on obtaining an IBN 5100. Then after Mayuri Shiina dies, the third part is focused on getting the 42 inch CRT and IBN 5100 back from the Rounders. Then, after Rintaro Okabe uses the IBN 5100 to infect the Echelon system with a virus Itaru Hashida made to destroy its records of D-mails, the fourth part takes place in the Steins Gate worldline (or one that is very similar) and focuses on saving Kurisu Makise.

The game involves going around to different locations in Akihabara and interacting with characters and items, investigating, and of course being able to let out the mad scientist laugh of Hououin Kyouma whenever you want. The character 4℃ appears in the game despite his role being minimized in Steins;Gate Elite, which this game is bonus content for. It features some locations that were introduced in Steins;Gate: Linear Bounded Phenogram and Steins;Gate 0 such as Daru’s hideout and a Christian church.

It is possible to get a game over and lose the game if you make a mistake. Combined with the lack of save games, this can make the game a little frustrating, but this is actually typical for Famicom/NES games from the 1980s and it was done this way to give players the authentic feel of a retro game.

8-bit ADV Steins;Gate was developed by 5pb., planned by Chiyomaru Shikura, and produced by Tatsuya Matsubara. The English localization was done by Spike Chunsoft. 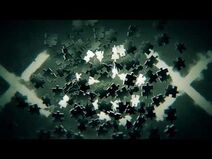 Retrieved from "https://steins-gate.fandom.com/wiki/8-bit_ADV_Steins;Gate?oldid=22706"
Community content is available under CC-BY-SA unless otherwise noted.