This article is a stub. You can help Steins;Gate Wiki by expanding it.

Episode 01: Prologue of the Beginning and the End

Itaru Hashida (橋田 至, Hashida Itaru), also known by his nickname Daru, his online handle DaSH ("Daru the Super Hacker") and Barrel Titor, is a main character in Steins;Gate, Steins;Gate 0 and Robotics;Notes DaSH. He appears on the Twipo social media app in Robotics;Notes, and is mentioned in Chaos;Child. He is an experienced hacker and a hardcore otaku, a member of the Future Gadget Lab and a close friend of Rintaro Okabe who eventually becomes the husband of Yuki Amane and the father of Suzuha Amane.

Daru is a short and overweight guy who needs glasses to see.

He always wears a dark green/olive t-shirt and a pair of blue jeans along with his signature yellow cap. In one of the anime adaptation's episodes, Daru is seen wearing a yellow Hawaiian shirt.

Daru is obsessed and extremely talented with programs and computers, capable of hacking into the mainframes of top-secret organizations and processing complex computer codes.

Like Rintaro Okabe, Daru enjoys making Future Gadgets, but he is not nearly as enthusiastic about it as Rintaro is. Daru also has a very particular naming sense for his creations, usually adding serial and version number even if unnecessary.

One of Itaru's most prominent characteristics is his obsession over moe culture, as well as his perverted tendencies, often to the annoyance of those around him. He is also a big fan of Faris.

While Rintaro Okabe and Itaru had known one another since high school, their friendship only really began from the moment they entered university. Itaru joined the Future Gadget Lab some time after Mayuri Shiina, his reasoning for doing so being that May Queen Nyan-nyan was fairly close to the lab.

While Rintaro and Mayuri were off to attend Dr Nakabachi's seminar on time travel, Itaru stayed on the lab trying to find out what was the problem with the PhoneWave, the lab's latest Future Gadget. As he experimented with it, a message from Rintaro, informing him of the murder of Kurisu Makise arrived and was sent to the past through the PhoneWave, shifting the worldline towards the Alpha Attractor Field. 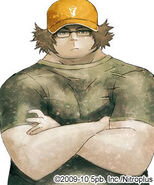 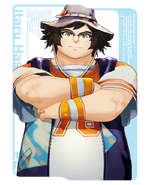