Anata no Eranda Kono Toki wo 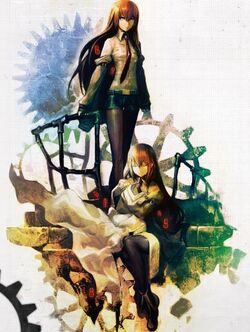 Steins;Gate: The Movie - Load Region of Déjà Vu (劇場版 シュタインズ・ゲート 負荷領域のデジャヴ, Gekijōban Shutainzu Gēto Fuka Ryōiki no Déjà vu?) is an animated film based on the visual novel Steins;Gate. The film opened in at least 30 theaters across Japan on April 20, 2013 and earned 199,445,318 yen (US$2,013,799) by its second weekend. Film-goers between May 11 and the 24th were given one of two new short novels as side stories to the movie.[1] Novelized and manga versions of the film itself have also been released. The movie is generally not considered canon as it contradicts Holy Day of the Calamitous Birth, which is later referenced in Robotics;Notes.

The film takes place in August 2011, one year after the events of the anime series. After his painstaking journey across multiple world lines due to the invention of D-Mail, Rintarō Okabe has tricked the universe and the attractor field convergence itself into falsely believing Makise was murdered, effectively creating a new world line he calls Steins Gate; here, the deaths of both Mayuri Shiina and Kurisu Makise are prevented while a peaceful future for humanity has also been provided, simultaneously averting World War III as well as a SERN-propelled dystopia.

On August 3, Kurisu arrives in Japan for a press conference and reunites with all the members of the Future Gadget Laboratory. However, after she and Okabe meet in the lab, Okabe begins to have intense side effects from his past time-leaping, increasingly seeing lengthier durations of visions of some of his previous experiences on other world lines, and even hallucinations of a world line he never time-leaped to. The next day on August 4, a mysterious visitor shows up at Kurisu's hotel room, telling her to remember three things: a cell phone, a microwave oven, and SERN. Later that day, as Kurisu is talking to Okabe at a laundromat about how her own instances of déjà vu may be similar to Okabe's 'Reading Steiner' ability to retain memories from other world lines, Okabe suddenly disappears in front of Kurisu. Furthermore, no one else seems to remember Okabe ever existed, with Kurisu herself barely retaining a faint memory of the original Future Gadget Lab founder.

A week later on August 11th, as Kurisu finds a fork that Okabe had given her and remembers the words the stranger left her, she learns Itaru "Daru" Hashida had for some reason hacked into SERN, suddenly giving her the urge to use it to build a time leap machine. Using the machine, Kurisu leaps back to the night of August 3, when she observes Okabe disappearing from and reappearing into existence, with everyone's memories of him changing accordingly. She is then contacted by the visitor from before, revealed to be Suzuha Amane, who came from the future using a time machine that the future Kurisu built.

She explains to both Kurisu and Okabe that Okabe's strong memories of previously visited world lines are overloading his Reading Steiner, causing him to involuntarily time-leap on his own between the unstable Steins Gate world line and the "R" world line, the only other world line in which neither Mayuri nor Kurisu die and which has a divergence difference of .000001% from Steins Gate. Suzuha states the only way to save him from vanishing completely from Steins Gate is for Kurisu to use a time machine to travel to the past and alter his memory in the Steins Gate world line to cement his sense of reality there. Okabe ostensibly refuses, as he emphatically feels neither time machines nor time leap machines should exist, and doesn't want Kurisu to go through the same suffering he experienced, saying he would prefer her and Mayuri continue living in peace even if it meant he would cease to exist. She insists on trying to save him, but Okabe equally urges Kurisu to forget him, leaving her with a kiss.

The next day, Kurisu runs to the lab to confess her love to Okabe and insist to him that she won't be able to forget him (just like at the end of episode 22, when Kurisu tried to unsuccessfully confess to him right as he broke the 1% divergence barrier). However, he disappears again right in front of Kurisu at the lab before she can tell him her feelings; Kurisu then breaks down in tears and almost uses her time leap machine a second time before grudgingly accepting his warning and deciding to try to forget him. Later, on August 13, as the Future Gadget Lab gets word that it might have to close up, Kurisu is once again approached by Suzuha, who tells her that she is not being honest with her own feelings, and eventually convinces Kurisu to go with her in her time machine.

Suzuha declares that, to keep Okabe in the Steins Gate world line, he must be implanted with a powerful memory that helps distinguish it from other world lines. The two travel back to June 30, 2005, where Kurisu attempts to talk with the young Okabe, only to result in him getting into a car accident instead, leaving her too afraid to attempt another trip to the past. Back in the Okabe-less present, Kurisu discovers that Mayuri and the others also possess faint memories of Okabe when she learns that they would like to try to keep the lab open; their memories are further awakened when she does an imitation of his persona, Kyōma Hōōin. Encouraged by everyone's feelings, Kurisu returns to the past, this time succeeding in her mission by implanting the concept of Kyōma Hōōin into Okabe's mind (which led him to take on his 'mad scientist' persona to emotionally protect Mayuri), and giving him his first kiss. With these experiences cementing his memory in the correct world line, Kurisu manages to bring Okabe back from the R world line into Steins Gate: a transition which is signified when a busy crowd materializes around them during their final conversation at the end of the movie.

The cast of Steins;Gate is returning for the movie: 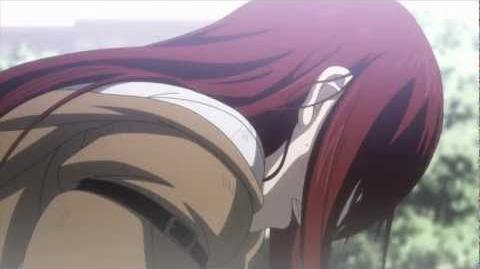 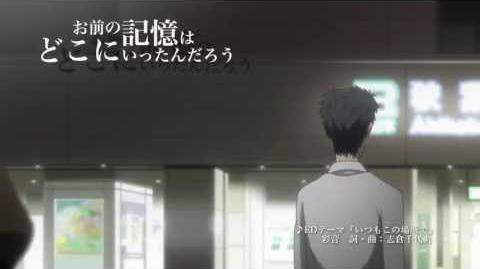 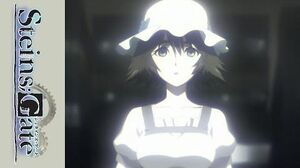 In order to save his beloved one, Makise Kurisu, and his childhood friend, Mayuri Shiina, Okabe Rintaro has changed the numerous pasts (moving [through the] world-lines) over and over. Finally he has reached the ideal Steins Gate world line. The cost of which was Kurisu losing her memories of Okabe, but in the hustle and bustle of Akihabara their sudden reunion played out in their bonds deepening once again. However, by overcoming numerous world lines Okabe's brain has begun to bear a great "burden"!? A great surprise! The all new movie has been novelized!

The first year as a lab-mem. …Moeka's everyday "Eventually, the time to understand the meaning will come."

That's what Okabe-kun told me.

Shounin Kyoumei no Souvenir (STEINS;GATE 承認共鳴のスーヴェニア , Shounin Kyoumei no Suuvuenia?).[9] is a short story written by scenario supervisor Naotaka Hayashi. The story centers around Moeka Kiryu and Mayuri Shiina. Movie-goers would recieve this story between May 18 and May 23, 2013.
It's preview text reads:

That is, Moeka's déjà vu filled with regret. "Why did I, completely refuse/reject/disregard Shiina-san's kindness?"