On March 28th, 2015, the same day as the visual novel was announced, Chiyomaru Shikura, the executive director of MAGES., stated that the anime had already been greenlit[1]. The anime began airing on April 12, 2018[2], spanning 23 episodes and an OVA[3].

The teaser for Steins;Gate 0 was released on July 28th, 2017. It's giving us a recap of the events leading to the main story whilst giving fans more information on the project at hand.

TVアニメ「シュタインズ・ゲート ゼロ」PV第1弾
The first PV trailer with shots from the anime also revealed the premiere of the anime to be in Spring 2018 (April).

TVアニメ「シュタインズ・ゲート ゼロ」PV第2弾
A second PV trailer was released a few weeks before the premiere. 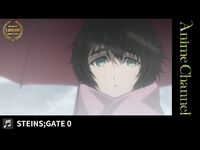